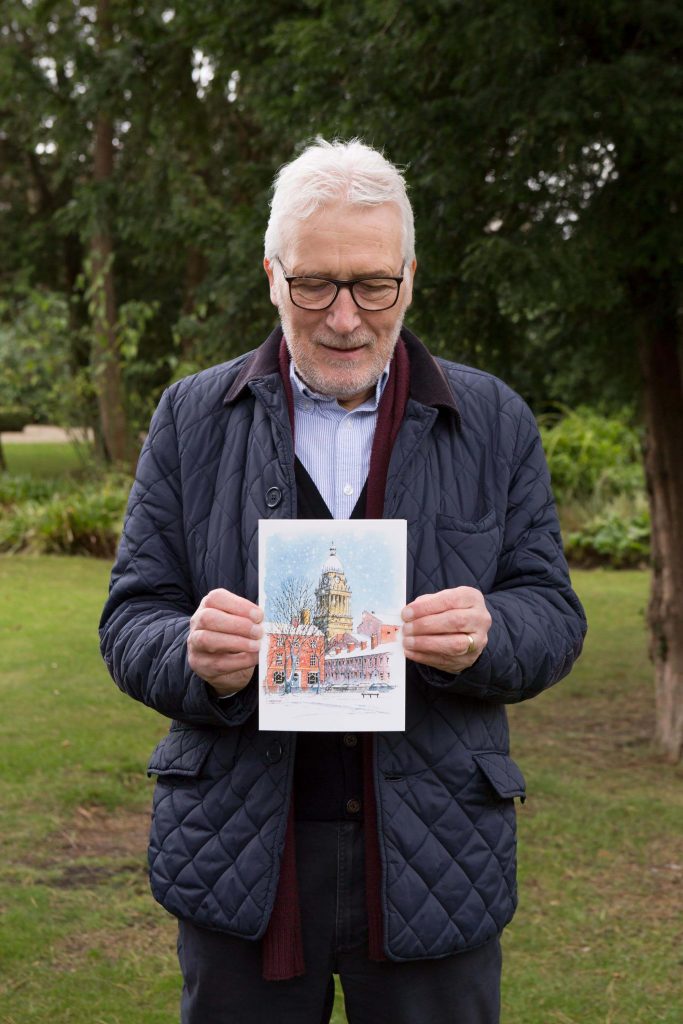 I first exhibited at the St Gemma’s Art Exhibition in 2003. The most lasting effect was that I had found a way that I could in my own small way help raise funds for such an amazing cause.

As well as being on the Art Exhibition Committee, I have also spent time in the Art Room at the Hospice helping day patients with their art in its many forms.

At the 2015 Exhibition I was voted Best in Show and was therefore the Featured Artist in 2016, it was at this time I was asked whether I would do the St Gemma’s 2017 Christmas Card. I was both humbled and thrilled to be asked and was only too pleased to say yes.

What a task I’d set myself. As a result I spent many hours walking the streets looking for the view that would capture a wintery Leeds that everyone would recognise. Many sketches later, I arrived at the view of the Town Hall as seen from Park Square. Having found the view now was the time for “artistic licence” to kick in, firstly add some snow, next Christmas lights in the trees and finally a wreath on the facing door, job done.

I’m pleased to say the 2017 Christmas Card was a great success with more than 7,000 cards being sold. Though no sitting on my laurels as I’ve now agreed to do the 2018 Christmas Card. I’d better get walking those Leeds streets again.

What John may have considered a small gesture raised nearly £4000. Use your skills to support St Gemma’s, www.st-gemma.co.uk/how-you-can-help